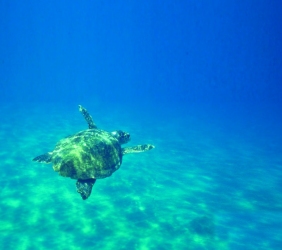 Rethymno beach welcomes every year the egg-laying of the sea turtles Caretta-Caretta. Be the one who participates in the release of an injured sea turtle, or lives the hatching of an egg and escape of a baby on its first trip into the ocean. Excavations are done during Fall each year for the inspection of the success of every nest and, if lucky, one may see a baby Carretta-Caretta escape and speed to the sea.
ARCHELON is a non-profit organization that protects the Greek nesting beaches of the endangered loggerhead sea turtle. During nesting season (from May until August) nests are protected during the night. ARCHELON is responsible not only for protecting the turtles and their habitats but also for raising awareness about their plight by working with the local community and visitors in order to ensure the loggerhead sea turtle’s future on this planet. Supporters in this effort are local and international volunteers, as well as the Municipality of Rethymno. Furthermore, ARCHELON seeks to promote the potentially mutually beneficial relationship between tourism in Crete and sea turtles. Come to Rethymno to witness and live one of the biggest environmental experiences! For this year’s schedule visit: www.archelon.gr or www.rethymno.gr 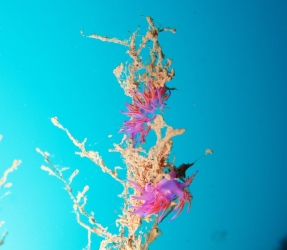 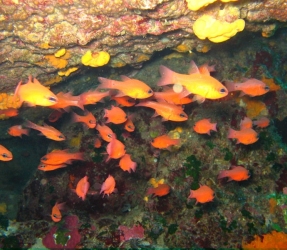 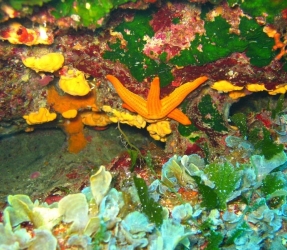 The Greek seas are rich in large mammals, species that have been encountered since antiquity as we witness testimonies about their existence in many ancient texts and the decoration of vases and frescos. The close relationship between the Cretans and the dolphins, which has been depicted since the Minoan years, is illustrative through the dolphin wall paintings found in the Queen’s Hall in Knossos.
In the marine world of the Mediterranean, there are numerous herds of pelagic fish, marine mammals, big predators, and sharks. In addition to the famous endangered Mediterranean monk seal that lives on almost all the coasts of the country, deep whales, blowers, dolphins, and foxes live in deep waters. These are either permanent residents of the Mediterranean or occasional visitors. Especially on the shores of southern Crete, the Greek Trench, hosts many of these species.
The bottom of the Mediterranean has great diversity as it is interrupted by rocky reefs, rich in shapes and colors, while coastal habitat is one of the most productive ecosystems in the world. Here rocky bottoms are found, but also soft from mud, sand or gravel, marine areas with sea plants that really resemble undersea meadows, as well as many hideouts, caves and protruding rocks. The frame is complemented by an inexhaustible color palette of fish species featuring amazing adaptation strategies. Parrot fish, Rainbow wrasse, anemones, crustaceans, echinoderms are some of the species we meet.
The construction of the Suez Canal that connects the Mediterranean Sea with the Red Sea has brought unprecedented biogeographical rearrangements to the Mediterranean. Since its creation, various tropical species that have begun to cross the channel, driven by the currents, have appeared in the Mediterranean. Gradually, some of them settled and became permanent residents. These migratory species are called “lesepsiana” in honor of the canal creator, Fernando de Lesseps. 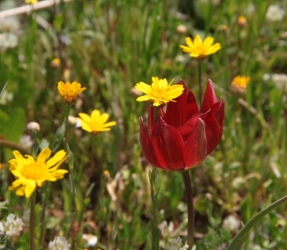 Rethymno, like all Crete, has an amazing variety of flora, which is directly linked to the climate and geomorphology of the place. At low altitude, vineyards, olive groves and orange groves dominate. As the altitude rises, the low vegetation of aromatic and endemic plants and flowers prevails, some of which are under threat of extinction.
Forest systems, which are rare, grow mainly in the mountainous areas, particularly in the southern side of Dikte, Psiloritis, Asterousia and the White Mountains. There are forests of pine trees (Pinus brutia), forests of oaks (Cuercus Ilex), while in many cases we can encounter valonia oak (Cuercus makrolepis) forests as well as small ecosystems of the Cretan palm tree (Phoenix Teophrastis-in Lake Preveli). 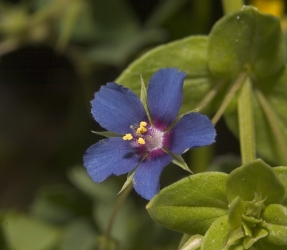 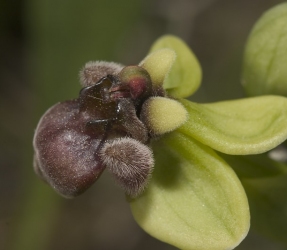 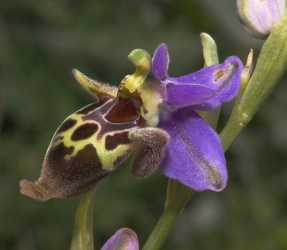 About 2000 species of plants have been recorded in Crete, of which 160 are endemic. Each year, rare species of plants “challenge” botanists from all over the world to study them. Among them, endemic orchids are impressive, while exceptional landscapes with various endemic tulips are created in the White Mountains, Dikti, Gramvousa peninsula and the small botanical paradise of Yious Kambos in Rethymno. The best time to get to know them, is at their peak in spring time. 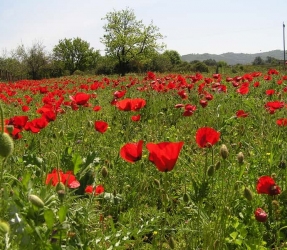 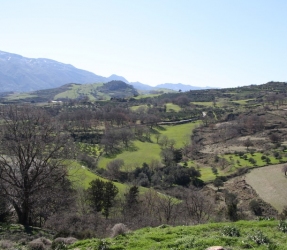 Also, herbs are grown everywhere in the mountains, the cultivated land and the seaside areas. Several of these are endemic and have been known since antiquity for their medical properties. 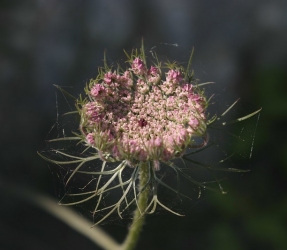 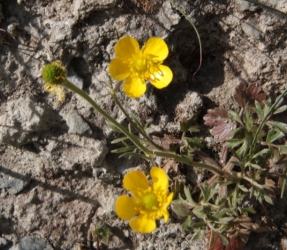 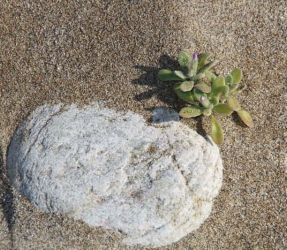 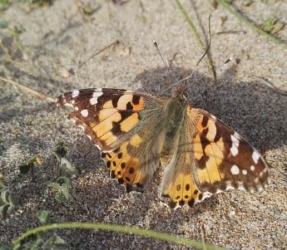 In Crete, due to the diversity of the landscape and the morphology of the terrain, we may also find endemic species of fauna. As an island isolated from other continental regions of Europe, Asia and Africa, its fauna shapes intense genetic diversity while hiding many secrets about the evolution of species.
The greatest concentration of endemic species is found in mountains and canyons, where ideal climatic conditions prevail and human presence is limited. There are no animals in the island that could harm humans, which the Cretan ancestors attributed to Hercules’ feast to honor the birthplace of Zeus, who protected him from Saturn. 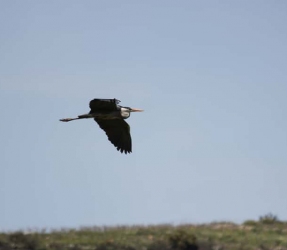 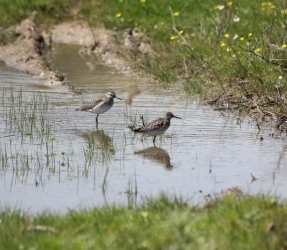 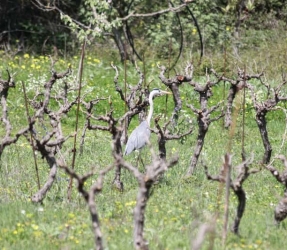 In Crete, species from all groups (mammals, rodents, amphibians, reptiles, invertebrates and vertebrates) are found, while throughout Crete there are no wild mammals with the exception of the Wild cat (Felis Silvestris cretensis), who survives in Psiloritis. Caves are also extremely sensitive ecosystems that host, apart from invertebrates, and many vertebrate groups, with the most important the bats.
The mountainous areas of the island and its canyons are of considerable ornithological interest, due to the variety of birds, especially the predators, breeding at their borders. The bird fauna of Crete is considered one of the richest in Europe, as it hosts more than 350 species. In the Cretan Mountains, the largest island population of vultures in the world is observed, while, along with Corsica, they host the last pairs of bearded vultures (Gypaetus Barbatus) in the Balkans.
Along the island there are important areas for predators as they reproduce and live in them. Examples include: Gypaetus barbatus, Gyps fulvus, Aquila chrysaetos, Hieraaetus fasciatus, Falco naumanni and Falco peregrinus. In the island is also reproduced Alectoris chukar and Pyrrhocorax-pyrrhocorax. In eastern Crete is the Buteo-buteo as well as the worlds’ largest colony of Falco de Eleonorae. 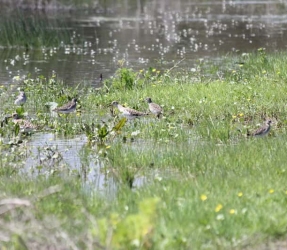 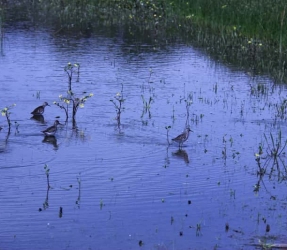 Crete, as an island at the crossroads of three continents, hosts, besides permanent residents, thousands of migratory birds, which reside in the wetlands of the island. That is why bird watching in Crete is one of the most common activities on the island.